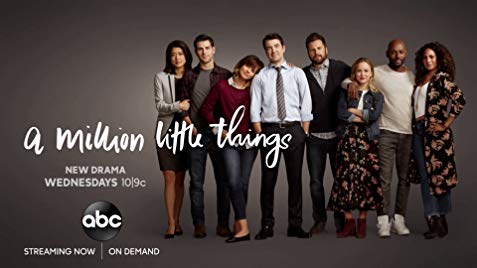 My original prediction from the newsletter when it first aired:

A Million Little Things: The life of a group of friends post one of their friends taking his life.  It’s just as sad as it sounds.  I feel like it’s ABC’s answer to This is Us only with an even more depressing plot if possible.  Look people liked this one, and there is something that happens in the Pilot that kind of traps you into the next one.  This show will either surprise everyone and be incredible or be the absolute biggest piece of shit ever. #tbd #stillgoingtowatch (ABC and Hulu)

I really thought this show was going to be the biggest turd.  How could ABC successfully pull off an almost tit for tat of This Is Us? They did it.  Something about Ron Livingston that I love to hate.  Is it that he broke up with Carrie on a post-it? Definitely.

Here Ron plays a guy named Jonathan Dixon, who has just taken his life.  The show centers around his widow, family and group of friends as they deal with the impossible.   Sounds completely and utterly predictable.  There are moments that are.  However the cast is great, and the stories kind of grab you.  It’s in the same category as The Parenthood and This Is Us.

The show got such good traction and reviews, ABC even gave it a better day and time slot as it will air on Thursdays, 9 PM starting in September.  Catch up on Hulu.