Nusthell: 2021 was a dumpster fire of a year in many ways, but TV was not one of them. TV actually had quite a year.  I always reach a point where I worry that I maybe have finished TV and then boom! This year we got hit with more shows and content than you can dream of.

I wrote a quick poem (naturally) about some of our favorite shows before jumping into my Top 10 New Shows of 2021!

You were always there for us

To bring us cheer

This year was stellar

You brought your A game

Let’s breaks it all down

Succession had its 3rd Season

and while the build was slow,

it was the build to end all builds.

Ted Lasso had a Rainbow Season

The second being better than the first

I was laughing, I was crying

Oy, Nate is the worst.

Sad to see them go away

The Boys hit us with season 2

Even more wild and violent than I can say

The Morning Show came back

To have us relive the last year

I’m not sure why they did this to us

Do not watch if you’re looking for cheer

Sex and the City is Back

It was an event you could not let pass

But the jury is out on what was worse

The premier or the following Peloton Ad

Impressively even more doom than before

and nailed it down to “the dress”

It was one of the best seasons

Definitely one to impress

Scott Speedman is back

Back on not one but two shows!

And on You very creeped out by Joe

Curb Your Enthusiasm is back

with it’s most awkwardly awesome season to date

Larry David is a marvelous gem

I hope he never goes away.

Emily went back to Paris

A love triangle that keeps you twisted

The Great came back just in time

to leave you feeling gifted

There were tons of new shows

For that we should say Amen

So without further adieu

Best New Shows Squid Games: (Netflix) I have to make this my #1 show of the year.  This show has left me speechless.  At the edge of my seat.  Holding my breath.  My heart is skipping beats.  My palms are sweaty.  Every single cliche applies.  I am horrified yet absolutely addicted.  I’m terrified and also cannot take my eyes off of it.  This show is super violent and I am advising that you proceed with an abundance of caution however you must at least attempt to proceed.  If at the very least to see what the hype is about.  This show is unprecedented.  It’s as if Ready Player One, Saw, Hunger Games and Candy Land had a baby.  You’re saying “what? Cristy! That doesn’t make sense!” I’m saying, Right?! Watch it.  Find the trailer HERE

Sex Lives of College Girls: this show is the break out comedy hit of the year for me. Mindy Kaling (The Office, Never Have I Ever) has once again made TV magic.  I have declared her my TV Fairy Godmother and thank her for her bestowing us with yet another TV gift.  It’s incredible to see real authentic girls in a coming of age story.  There is something for everyone in this show, and it’s always always always a good idea to relive college. Find the Trailer HERE

White Lotus: (HBO): Another must see.  The cast Connie Britton (who can do no wrong), Jennifer Coolidge, Steve Zahn, Molly Shannon and more come together for just the right amount of drama, but drizzled with sarcasm and humor.  The storytelling is layered, compelling, and creative.  Plus it is set in Hawaii so the background will have you swooning.  Find the Trailer HERE

9 Perfect Strangers:  (Hulu)This show was kind of like watching White Lotus except if everyone was microdosing mushrooms.  Nicole Kidman is somehow the same person yet totally different in almost every role she plays. Which is of course a good thing because she is Nicole Kidman.  I would watch this show  if only for the scene with Melissa McCarthy and Rhianna’s “Sex on the Brain” .  But it’s entertaining and excellent. Find the Trailer HERE

Only Murders in the Building: (Hulu) This show!!! Steve Martin and Martin Short can do no wrong.  However here they happened to have combined for an incredibly hilarious murder mystery.  Selena Gomez is an excellent addition to the duo along with special guest roles by Tina Fey and Nathan Lane.  The show is layered with an incredible set, great cinematography and impeccable costumes. I am still swooning over Selena’s coats.  It’s 30 minute episodes, and has so many fun twists and turns.  Definitely add it to your list. Find the Trailer HERE 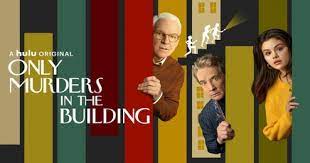 Acapulco: (Apple TV) This show is the TV  equivalent of a spicy margarita.  It has everything you are looking for in a new show.  It’s light, sweet, funny and of course spicy.  It is set in a beautiful hotel in Acapulco in the 80’s complete with amazing costumes and music that transport you back in time.  If all that is not enough to convince you to watch, there’s a love triangle.  I mean who can resist a spicy love triangle? Find the Trailer HERE

Mare of Easttown (HBO Max) It’s a drama miniseries where Kate Winslet plays a detective investigating a murder in her small town near Philadelphia.  There is the return of Guy Pierce, Jean Smart plays her mother and there are more twists and turns than you can even count.  A stand out this year.  Find the Trailer HERE

Maid: (Netflix)  just the preview for this show can move you to tears.  I would warn you that this show is heavy and dark but it was so well written and acted.  The story needs to be told and needs to be seen.  I would only watch this show when you are up for something heavier and maybe watch Only Murders in the Building or a few episdoes of The Office when you finish to help bring you back.  Find the Trailer HERE

Hacks: (HBO Max) You had me at Jean Smart.  The woman can just do no wrong.  This show is a godsent and watching it was an absolute pleasure. Many many TV birdies came in from all over to tell me to watch it.  It was a quiet gem that HBO has been sitting on.  Definitely deserves to be pushed a little more to the forefront if you ask me.  Find the Trailer HERE

Wanda Vision: (Disney Plus) Yes, I am a little bit too into Marvel.  But if you are into Marvel even at all, then this show is a must see.  I really break it down HERE, but in a nutshell I am floored by the creativity of this show.  The way they went through and paid tribute to all the different eras of TV in the first few episodes was breathtaking.  The way they move the story forward and weave back into the Marvel Universe was also just a different level. Marvel is bouncing from movie to series and doing it brilliantly. Find the Trailer HERE